Born of music and of dragon fire, I entered this world in a ball of screaming fury. Literally. I cried when I was born. Doctor didn’t even have to spank me or anything. He totally did though…Jerk.

That’s not what you are looking for, is it? I’m so bad at these. Well, let me try again. 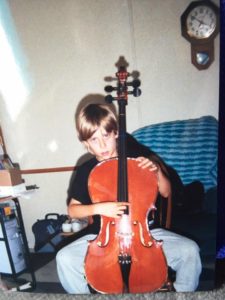 I grew up playing music my whole life. From accidentally learning the intro to Beethoven’s fifth on the piano as a wee little lad, to picking up the cello in elementary school, I have always loved making music. I played the cello for a few years before dropping it in middle school for the guitar, cuz guitars were cool. I then played that for a few years before deciding that I was actually pretty bad at it, but not before trying to start up a solo doom metal project. Whoof…

In late high school I started dabbling with electronic music, and bought my first synthesizer. I rebranded my music project in a direction away from doom metal and more towards ambient industrial, which I had a lot of fun doing! It was through this endeavor this that I had my first performance in front of a crowd at a coffee shop doing open mic. I received screaming reviews like “Right on, man,” and “It wasn’t my thing, but you really seem to know what you’re doing.” 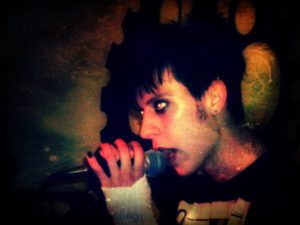 After a while of this, I stumbled upon the discovery that would change my life. I had moved to Ashland Oregon for college, and was enjoying an evening of dranks at my favorite local establishment, Oberon’s Three Penny Tavern. A Midsummer Night’s Dream inspired Ren Faire bar, Oberon’s was just celebrating its sixth month anniversary. There was a sweet open jam session on the stage and anybody with an instrument was up there having a great time. A guitarist, some hippies with hand drums – you know, usual stuff – but then it happened. A wild Scotsman appeared: clad in a kilt with an animal pelt over his shoulder, long scraggly salt and pepper hair, purple warpaint smeared across his face! He jumps on stage, pulls out a case, and produces an instrument the likes of which I had never seen! Turning a crank with one hand and shredding on a keyboard with the other, I was struck speechless! I didn’t know what it was but I knew I HAD to have one!

As he was packing up, I managed to scoot over to the stage to ask what it was that he was playing. A Hurdy Gurdy. With those words, I knew that I would one day play one. I didn’t realize until looking it up just how hard they are to find, and once you find one just how much money you need to be prepared to spend to actually get one. Slightly disheartened, I told myself that I might be able to find one someday. 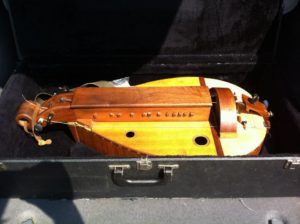 What I didn’t realize was that “someday” happened to be almost one calendar year latter. I was in the local music store making the offhanded comment about wanting to someday get a hurdy gurdy, but followed up my statement by saying that I had already asked and knew the shop didn’t have any. To this, the sales representative looked at me and said “Actually….Someone dropped this off for us to sell the other day.” He explained that it had fallen into some disrepair and that nobody in the shop really knew what to do to fix it, since it was so bizarre. They would either have to spend money to have someone fix it for them, or they would have to use their own time to learn how to fix it, which would only cost the store more money. I managed to talk them into letting me buy it “as is” for a reduced price and promised to fix it up as a personal project, because let’s be real, when would this opportunity EVER show up again!

The first few weeks were spent messaging luthiers to figure out what might be wrong with it and what I could do about it. It turns out that if you don’t play the hurdy gurdy it seemed incredibly daunting that the thing wouldn’t make any sound when the crank was turned, but to any hurdy gurdy player worth their salt, it turned out to be an incredibly easy fix. In two weeks, I had it up and working again and was out making terrible, terrible noises in the park. Think like a beginning violin student,  but with drone strings. Yeah… 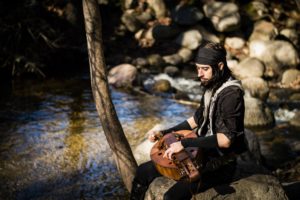 After watching a bunch of youtube videos, I was quickly able to learn what sounded good and what did not, which then led me to build up the confidence to start playing on the street corner in an attempt to make back some of that money I probably oughtn’t to have spent on ANOTHER musical instrument. After a while doing this, I happened to be in the right place at the right time to secure a spot on stage at Oberon’s Tavern. The band that was scheduled to play had to cancel due to illness, and they were left music-less. I made the joke about playing my hurdy gurdy, but the bartender looked me in the eyes and said “Do it! Even 30 minutes of music is better than two hours of silence!” So up I went, and played my little heart out for the better part of two hours! When I climbed down from the stage, a different bartender approached me, kinda scratching his chin, and looking at me with a cocked eyebrow, “So…that was really awesome. You should talk to our booking manager and maybe do that more often.” 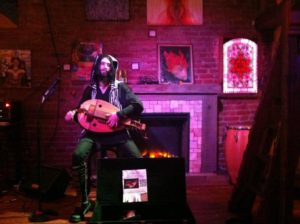 That is exactly what I did. I received a weekly gig playing a short time slot they usually had trouble booking, which was perfect for me just coming into my skin as a performer. I got a makeshift court jester costume, and started learning more and more songs, and soon enough, I actually felt like I knew what I was doing!

I was later contacted by the Camelot Theatre in Talent Oregon to play some preshow music for their production of The Lion in Winter, which was my first payed gig. I can’t tell you how excited I was to finally be able to call myself a “Professional” Hurdy Gurdy player! Not only did this line my pockets a little, but it really made me realize that this was exactly what I wanted to be doing!

I soon began hitting the limitations of the diatonic gurdy I had started with, and began saving money from busking on the street corner to be able to afford a custom one built for my needs as a musician. That’s pretty much the only way to get a hurdy gurdy, by the way: Find someone who still actually makes them! Thanks to diligence and some generous gifts from friends and family, I was able to commission my current gurdy be built for me by the wonderful folks at Altarwind Music. The wait was almost unbearable, but I was SO excited when it was finished. I even had a “grand unveiling” of the new gurdy for my friends at Oberon’s during my next set. 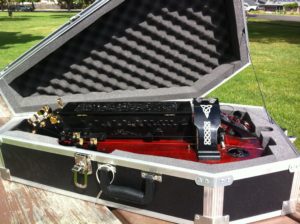 From there I have been playing as much as I can and learning all the while. It always warms my heart when people who knew me at the beginning of it all complement the progress I’ve made with learning this instrument that I love.
I have extended my services beyond a gig on a Tuesday night, and have played for weddings, fundraisers, private parties, and more!

That pretty much brings us up to date! Want some pictures or some more info on the gurdy? Get on over to this link here!

Have more questions about my life, the gurdy, or maybe about booking a bard for YOUR shindig? Scoot on over to the Contact page and send me a message!